Idylically situated, the valleys of Raydale, Bardale and Cragdale are reachable straight from the doorstep of Green Head Cottage and offer an embarrassment of riches for the outdoor enthusiast.

Semerwater is the largest glacial lake in the former North Riding of Yorkshire offering boating, swimming and fishing from Low Blean Farm at the northern shore.

For ramblers, there are breathtaking waterfall walks direct from the house, either heading west into Bardale or south up into Cragdale.  Semerwater itself is but three miles from the Green Head Cottage and a further walk along England's shortest river (the Bain) will take you from the northern edge of the lake to the pretty village of Bainbridge with its green, pubs, and children's playground.  You may choose to head up to Stalling Busk to see the ruined chapel or visit Raydale Preserves, manufacturers of fine jams and chutneys.  Noble Addlebrough dominates the view to the east of the house and a walk to its summit will reward you with fine views back over Semerwater on one side or over Wensleydale on the other.

Cyclists are also spoilt for choice with a number of quiet surfaced roads or bridleways and byways, including the old Roman Road (Can High Road) between Ingleton and Bainbridge. 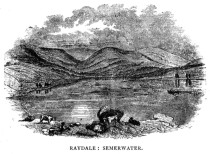